I was sorting out my painting miniatures recently, following our house move. Clearing out the old and tidying up the new, that sort of thing. I was putting all the minis from the various games, assessing what i had completed and what I hadn’t so that if a visitor expressed a desire to play e.g. Burning of Prospero, I knew whether the minis were painted or not and if so, where they were. It turns out that, either by forgotten design or a common-or-garden brain fart, I had painted all the Iron Armour marines as Space Wolves. That wasn’t so bright, I needed a squad of Thousand Sons or the game would be wrong! I lacked a spare squard of Iron Armour or similar 30K miniatures and didn’t want to buy a set as I have more marines knocking around than I will ever get round to painting (and I sold off a big box recently too!). Instead I fished out some ‘old’ marines, making a squad of marines from the Imperial Space Marines, Space Crusade, and 2nd Edition box set (with a Tactical Space Marine as a sergeant). I gave them a random set of weapons to imply that this is a rag-tag collection fighting a guerrila war in the ashes of their home using whatever weapons they can find. Painted them as quickly and as roughly as I could (maybe contrast paints will make this sort of thing even easier). Nice work. Now does anyone want a game of Burning of Prospero?

These I’m a lot happier with.  Good colour schemes, nice miniatures.  They were a pleasure to paint. 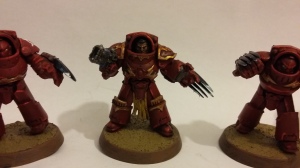 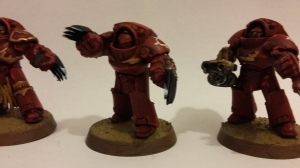 These were surprisingly tricky.  I’m not completely happy with them, but this will do. 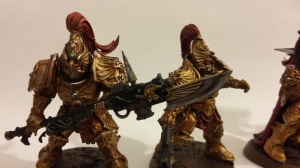 Working my way through the Burning of Prospero miniatures, amongst all the other things!  The Sisters were fun to paint, and in general satisfied my feminist inclinations.  That is: they’re dressed, and fairly realistic in proportion.  It’s nice to have some women in WH40K.  Now we need some female Imperial Guard, and a rebooted Sisters of Battle, perhaps some female Scitarii and Chaos Cultists, that sort of thing.  Miniatures that are just women, that woman-ness is not one of their personality traits, if that makes sense.  I think that the photos don’t look as good as the minis themselves.  My paintjob isn’t great, but they look pretty good on the shelves but not so great in the pics.

Geigor is the first Space Wolf I’ve painted since the early 90s.  I followed the Warhammer TV method for painting Space Wolves, which was very close to the method I use to paint my Steel Guard.  Whilst that made it easier, it wasn’t much of a leap in style or technique, and I think I would have liked a try at the baby-blue early 90s Space Wolves.  That’s one for another day! 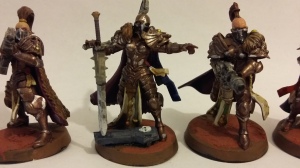 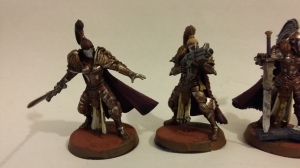