I bought this off ebay the other day and thought I’d share a few pics with you.  This is, of course, the plastic Space Ork boxset.  My ostensible reason for buying it was that it had lots of half used sprues and I’m always on the look-out for old Ork arms and weapons at a reasonable price!    But the lure of the cardboard box helped too.  I think I bought a few of these when I was a kid.  Much better value than the lead miniatures, though to my adult mind the plastics aren’t anywhere near as good.  I’m painting a couple at the moment and they’re not as fun to paint.  Because they’re not as detailed they’re actually more challenging to paint well (especially for someone like me whose still an enthusiastic amateur).  Still, they were dead cheap and enabled you to bulk out your squads really well.  they contained more weapons and arms than you needed so you had spares for your bits box, and the sprues were full of pouches, grenades, armour, spades, binoculars and all sorts of things that you didn’t really use but were considered essential to the full experience.  Enjoy the pics of the packaging! 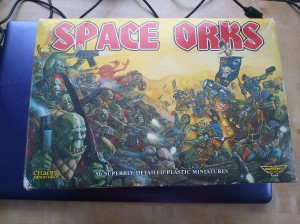 orc, standard bearer, who am i

Evening Oldhammerers.  I found this orc standard bearer in a small collection I bought.  It’s a bit good, isn’t it.  And faintly familiar.  That could be the style though.  I haven’t yet decided whether to strip it, but before I decide I’d like to know if anyone recognises the paint job and banner?  Maybe it was in a white dwarf or rulebook, maybe a golden daemon entry.  Or does it just look like a particular orc from WD?  Help me out here!

It’s beautifully painted – but is it an Oldhammer artifact?

I recently tracked down a copy of Battle Masters from ebay.  My brother had this back when I was a kid, and we got plenty of games out of it.  I don;t remember painting any of the models back then, so this is all new to me.  The models aren’t great, but are fairly typical of one-piece plastics from the early 90s.  My favourite is the Ogre – I’m going to keep on buying BM Ogres until I’ve got a small regiment of them!

As BM is a good game, I have decided to keep the miniatures as BM playing pieces, which means affixing them to the large green plastic bases.  I’ve painted these to a basic standard (even by my basic standards) but I hope that it’s good enough.   In order to imply that they are Nurgle worshippers I have given then a dull green trim and dark green cloak.

Been a long time since my last post, slow time for painting.  As you probably know by now, my favourite Chaos Space Marine Legion is the Alpha Legion.  I love the fluff, I love that there is much that is contradictory, and lots of space to fit my version of them into the 40K universe.  They’re also a bugger to paint!  I’ve tried lots of different ways, so my Alpha Legion warband is a bit hit-and-miss in terms of colour schemes.

I decided that I wanted to paint a squad of Alpha Legion that hadn’t yet been touched by chaos.  The Alpha Legion never went to the Eye Of Chaos, they have maintained at least one warband in realspace for ten thousand years, recruiting secretly across the years.

As usual all the figures are second hand, reclaimed marines from ebay.  I’ve stripped and rebuilt where I can but a couple remain in odd poses!  It’s all part of the fun for me to try and salvage them.  Most of these are 00s plastic marines but there is a single RTB01 marine and an early 90s metal Devastator there for Oldhammer goodness. 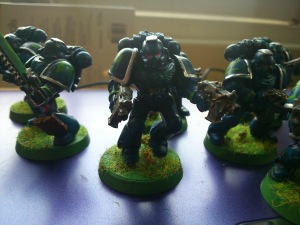 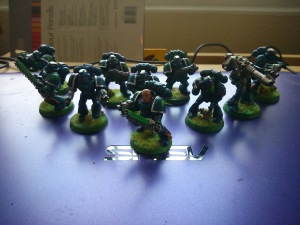