I finished my Deadcember offering.  Yes, yes, I know.

Undead are not my thing so it was hard enough to rustle up enough skellies to make up a unit.  I had to build a couple of them out of broken ones!  And whilst painting it I decided that the slotta base guy in the cloak… he’s probably not a skeleton at all.  Anyone know who or what that mini is?

The necromancer / lych / wight / whatever (anyone?) needed a new weapon and a new hand, and I think something has been cut off his hat.   He’s wearing a comedy rasta hat version of the traditional pointy-hat because he’s a massively racist necromancer. 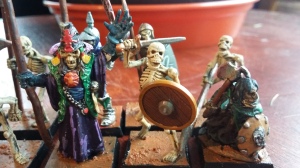 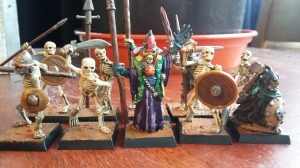