If I had my time again I would have decided to paint the Betrayal At Calth miniatures in the ‘correct’ Legion colourschemes.  There are a number of reasons for this.

Still, I have one plastic Captain left to paint and then Betrayal At Calth will be complete.  If only I can remember what I did with him… 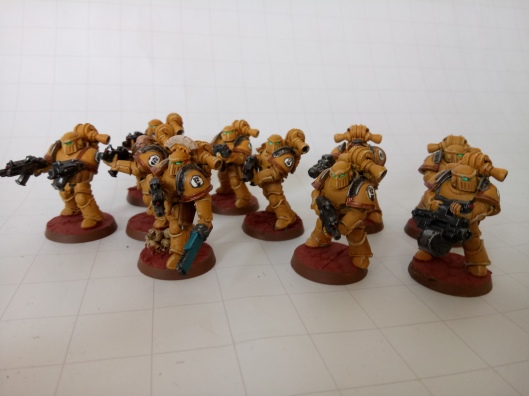 Don;t look too closely at the Legion icon… 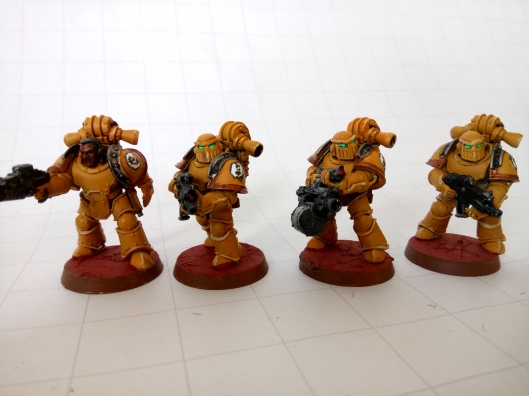 matey-boy on the left is supposed to look like he is reaching for his pistol….

the chap on the left here has had his left pauldron replaced. it was supposed to look like a field replacement, but it just looks crap.

i don’t think that crests suit the Fists particularly.

I was given Betrayal At Calth for Christmas.  I can’t tell you yet if its any good as a game, but the miniatures are lovely. Whilst they lack the charm and crazy genius of the late 80s Citadel output, these really are beautiful models.   Deciding against painting the contents as Ultramarines vs Word Bearers (as Ultramarines are yuk, and Word Bearers similarly uninspiring), I had to consider other options.  The baddies were an easy choice really – I’ve already got an Alpha Legion army and have given up ever getting a painting technique I am pleased with for those snakey scamps.  I do want to paint a Night Lords warband – in fact, I want to make the warband from the Night Lords series of novels by Aaron Dembski-Bowden.  I was tempted to use these as a place to start, but I want to use these as game pieces in Betrayal At Calth eventually, not chop them up into individuals.  So Death Guard it was.  Nurgle is my homeboy.

The paintjob was loosely based on the Forge Word painting instructions for Death Guard, along with some making-it-up-as-I-went-along.  It’s pretty hit or miss to be honest.  I’ll be changing the recipe slightly for the next Death Guard squad.  Still,  I am happy with this first attempt.