A vehicle for the cult. I have also bought a land train so as to add something oldhammery to the cult. Of that, later! I’m pleased with the mud spatter on this one, though maybe some weathering would have looked good too.

My final orktober offering is an oldhammer-newhammer combi. When the Speed Freeks game came out a few years ago I fell in love with the ork vehicles inside but I couldn’t afford the whole box. Later I picked up this Boomdakka Snazzwagon, which is a lovely kit, feels very old school, full of orky goodness. It could easily pass for a battlewagon in my opinion, especially against the tiny metal vehicles of old. Orks can buy heavy weapons to mount on battlewagons, so the weapon roll out here is whatever i roll on those lovely charts (heavy bolter, heavy plasma gun, missile launcher). Speed Freekz also get access to cheap vehicles, so I added a warbuggy and wartrak (skorcha). Poor tiny vehicles! The skorcha really needs a (full size) modern kit, by the way GW, hint hint.

A quick Steel Guard squad, using a sprue of modern marines that I had lying around. They look alright but they’re not as characterful as the old ones, are they?

Another Steel Guard squad, plus another Captain for the Command Team. I’ve painted one of the Space Wolf Captain minis before, for the Captain of the 3rd Company. That time I experimented with non-metallic metals, attempting a gold armoured marine. It wasn’t especially a success, though I might try again sometime now I’ve had a few more years practice. I’ve been trying to clear my leadpile recently, having moved countries to glorious Cymru and having therefore to have to confront the sheer piles of stuff I own. I’ve sold off all the mid-period miniatures, leaving only the cool old stuff and some of the brand spanking new sweet miniatures the GW workshops are cranking out these days. Thus this squad is all classic minis from the days of Rogue Trader and 2nd Edition, and I think it looks before it, don’t you?

The Freebooterz book is an amazing thing. It allows you to build almost any Ork army you want. All you need to do is pick a Warboss and his retinue, and a bigmob of at least ten Orks, then after that Freebooterz is your guide for making a fantastic army using whatever takes your fancy. The Outcast Retinue mob allows you to use a different clan to your main clan and still take whatever special rules that second clan has. Now, I haven’t got a main clan yet (though I have Goff and Bad Moonz clan Orks), so an Outcast Retinue is a pretty pointless thing to have. Still, the dice rolls were in, and an Outcast Retinue it was. I then rolled for a clan and it was Evil Sunz. But I’ve just finished a red, vehicle-based mob! An Evil Sunz Retinue offers you two Meks (and their associated odddbitz), plus cheap vehicles. But we’re not going to do that! This Retinue is missing all the things that make it an Evil Sunz Retinue! Mostly, this is because almost all my minis were already packed for my house move. One day I’ll add a load of vehicles to it, I’ve already bought one of the cool new Ork vehicles (did I say this last time, I love the new Ork vehicles, but I hate the modern Ork minis and flufff), and I will add a couple of tanks or something. The looted rhino (counts as a battlewagon) came in a lot I bought a few years ago and is a rough and ready conversion that didn’t need a lot of messing with. I cleaned up the paint job, added a few more bitz and some weathering and hoped that covered up the worst of it. The story behind this retinue is that a telly-porta accident seperated them from the rest of the clan, leaving the warboss, the boyz, the wagons, the runtz, and all the perks of kultur somewhere entirely different to the retinue. Following a period of adjustment, during which Big Mek Gorrunt ascerted his domination through a judicious use of a giant power klaw, they are now back and looking for a scrap. As any Ork knows, a wagon and a bike aren’t enough speed for Evil Sunz, they need more vehicles and they’re willing to fight for them!

So this is a first for me,  but so many other people were making such amazing warbands that I wanted a go too.  Instead of the intricate grimdark of Blanchitsu and its devotees, I’ve tried to start gently and playfully.  I actually finished these months ago, but forgot to take any photos at the time.  I’ve got quite a backlog of updates to get through!  I hope you enjoy these pictures.

The Inquisitor herself is a Hasslefree ‘Power-armoured Libby’, which I’ve done in blue because I’ve never painted anything vaguely Ultramarines-esque before and wanted to try it out.  It’s a lovely miniature, full of life and movement, and I enjoyed painting it.  I think that I should have painted some insignia and glyphs onto her armour.

Other miniatures in this group are from Blind Beggar’s Outlander range, Lead Adventure’s Astropolis, and of course Citadel – we’ve got a Chaos Familiar, an Adeptus Arbites, a Commissar, and a Battle Psyker.  Finally the robot was sculpted by Drew Williams. 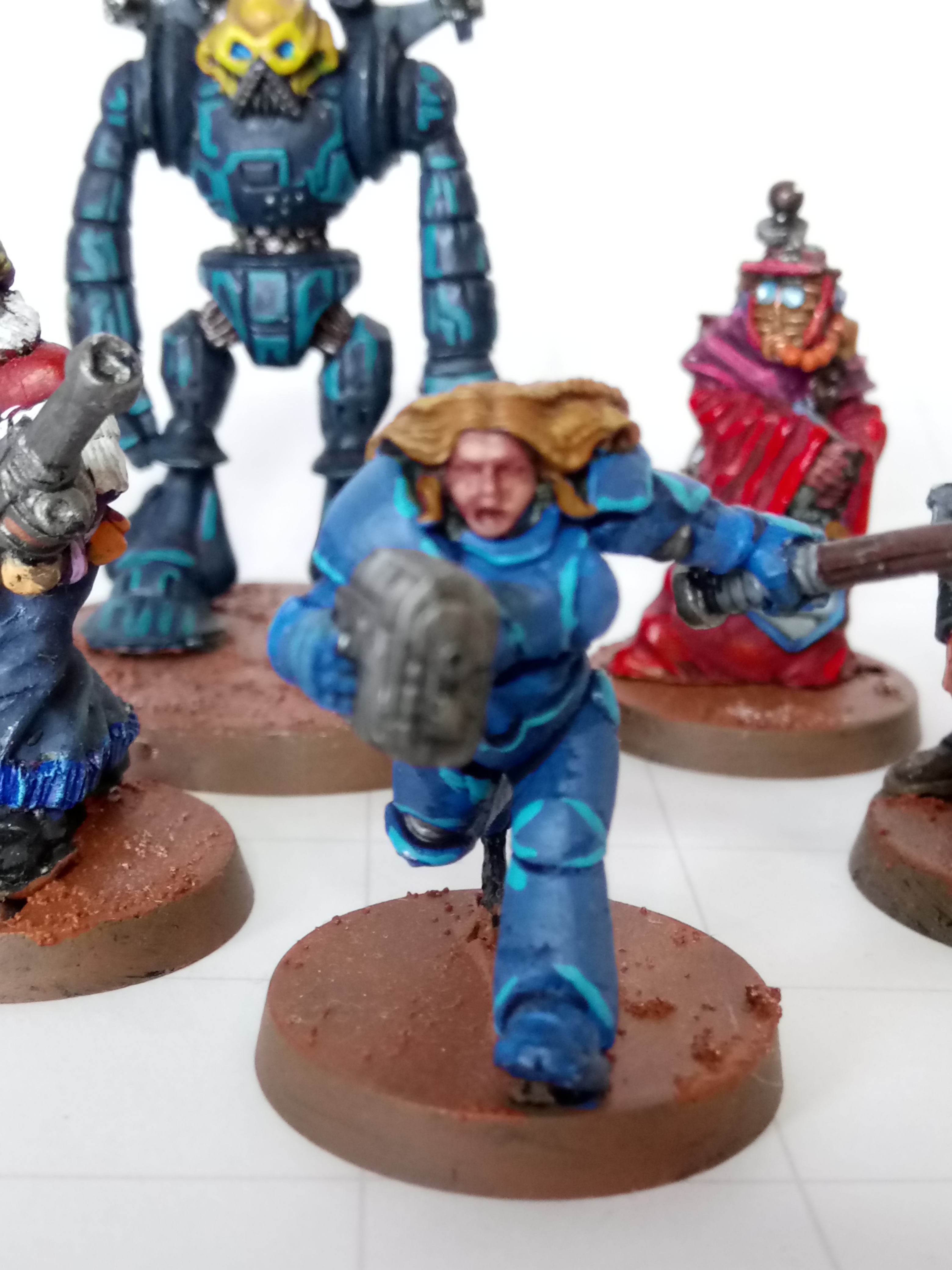 Now this was a fun project!  The list in Freebooterz is for a Mek, a Dok, and a Dread.  I added another Dread (because I had 2), and seeing as i wanted to use the Bionik Dok mini I took a 3 rolls on the bionik bitz chart, rolling telescopic legs, stainless steel teef, and an extra set of bionik arms with a kustom melta.  For the Dreads I rolled to see how many modifications they got.  I ended up with the first having an extra autocannon, kustom force field and speakers.  The second though, whew!  I ended up with a kustom d-cannon, squig-injection, extra autocannon, speakers, kustom ff, and a scorcher turret…  In the end I couldn’t fit the speakers on it, but I think i’ve got the rest right.  The red one is Da Nipper, and the yellow one is called Hot Lips.  Enjoy!

I’m sure that I can’t be the only one who has piles upon piles of miniatures waiting to be painted.  A big box of sprues sits here, overflowing with untouched plastic miniatures waiting to be built and painted so that I can use them as they were intended, with boxed games.  Battle Masters, Warhammer 4th ed, Advanced Space Crusade, Space Hulk, Assassination Force Super Team (or whatever it was called), Deathwatch Overkill, Betrayal At Calth, and Burning Of Prospero are all unfinished.  So!  I will be concentrating on painting these minis from now on.  I promise!

These are lovely miniatures, though what they have in detail they lack in the charm of the older hand-sculpted minis.  In many ways they were a pleasure to paint, though sticking to the ‘official’ paint scheme was quite troublesome –  I find black hard to paint.  Still, I think they have turned out well.

Dalešice Hazm is a techmarine.  He carries a bolt pistol,   A quick and simple marine specialist for my Steel Guard legion.

Pulling a plastic push-fit Warhammer Orc out of the leadpile,  I thought to myself “gosh, what am I going to do with this then?”.  I considered a few ideas… perhaps I could put together a Warhammer regiment.  Maybe I could use an arm with a gun instead of an arm with a sword and have it as a feral-looking boy in a boyz mob.  But I wanted to do another Freebooterz unit.  Wait a minute!  Is that a bit of my brain trying to alert me to something… I checked the book, riffled through the pages, there it is!  Wild Ork Outlawz, discovered by Freebooterz instead of proper Orks, who learn Kultur from them and are forever ruined for the Clans…  There were no proper figures for Wild Orkz, you were probably supposed to use Warhammer miniatures, with minor conversions.  So that is what I did.  Not a lot of Oldhammer goodness here, but Oldhammer in spirit.  Enjoy! 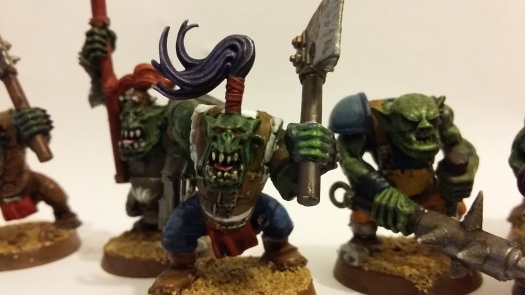