This is a bit of a one-off project that I painted for the hell of it, though I suppose that over the last few years I’ve probably painted enough fantasy squads that I could put together some sort of Chaos army, especially if you consider all the Battle Masters stuff… which reminds me, I must finish that sometime. Yeah, a chaos army would definitely work, some beastmen, chaos knights, I’ve got some plaguebearers and some pink horrors, some tzeentch wizards, some chaos dwarf artillery. that would make a good army. Anyhoo, when I pulled a war alter out of the leadpile, I struggled to think what to do with it. It was incomplete, missing a horn, and I considered trying my hand at sculpting but in the end decided that it would be more fun to tell a story with it.

Recently captured by a Nurglish wizard, the alter is just beginning its descent into chaos. It has been desecrated in Nurgle’s name, and sacrifices have been made on it to Nurgle. The statue hasn’t yet begun to change, but is degenerating. When enough sacrifices have been made, our wizard friend is possessed by a demon of decay and his physical form changes. Then men will tremble and plagues will run free!

Happy Christmas everyone, hope 2021 is a better year for us all.

Hello again everyone, and welcome to another installation of Bastard Fat-hands Difficult Modern Painting! This month, the Gellerpox Infected are very difficult to paint. I actually got the Kill Team boxset because I wanted the Rogue Trader and entourage, but I painted the Gellerpox gang first because they fit with the Death Guard from Dark Imperium. I am happiest with the Nightmare Hulks, which were a lot of fun to paint. I am least happy with Vulgror, I struggled with necrotised/undead/zombie dark skin. Obv. I could have painted him differently, but I like to try out new things. The VoxShamblers were tricky, in the same way that the very-similar PoxWalkers were tricky. I tried to give them three different skin tones here, but it came out very samey. The sculpting is wonderful though, I love most the hospital-trolley leg club, that really tells a story.

Finally finished these tricky bleeders.  I’m not very happy with them.  Like the Death Guard, they are lovely minis that I think really encapsulate the Nurgle plague zombie look.  They are heavily detailed, and you can see by looking at them how much time the poor sculptors must have spent looking at icky pictures of diseases and weird infections and gross skin conditions.  But they are blinking hard to paint.  There’s just so much there, so many different textures, so many tiny details.  In the end I had to accept that there is only so much a boy can do! 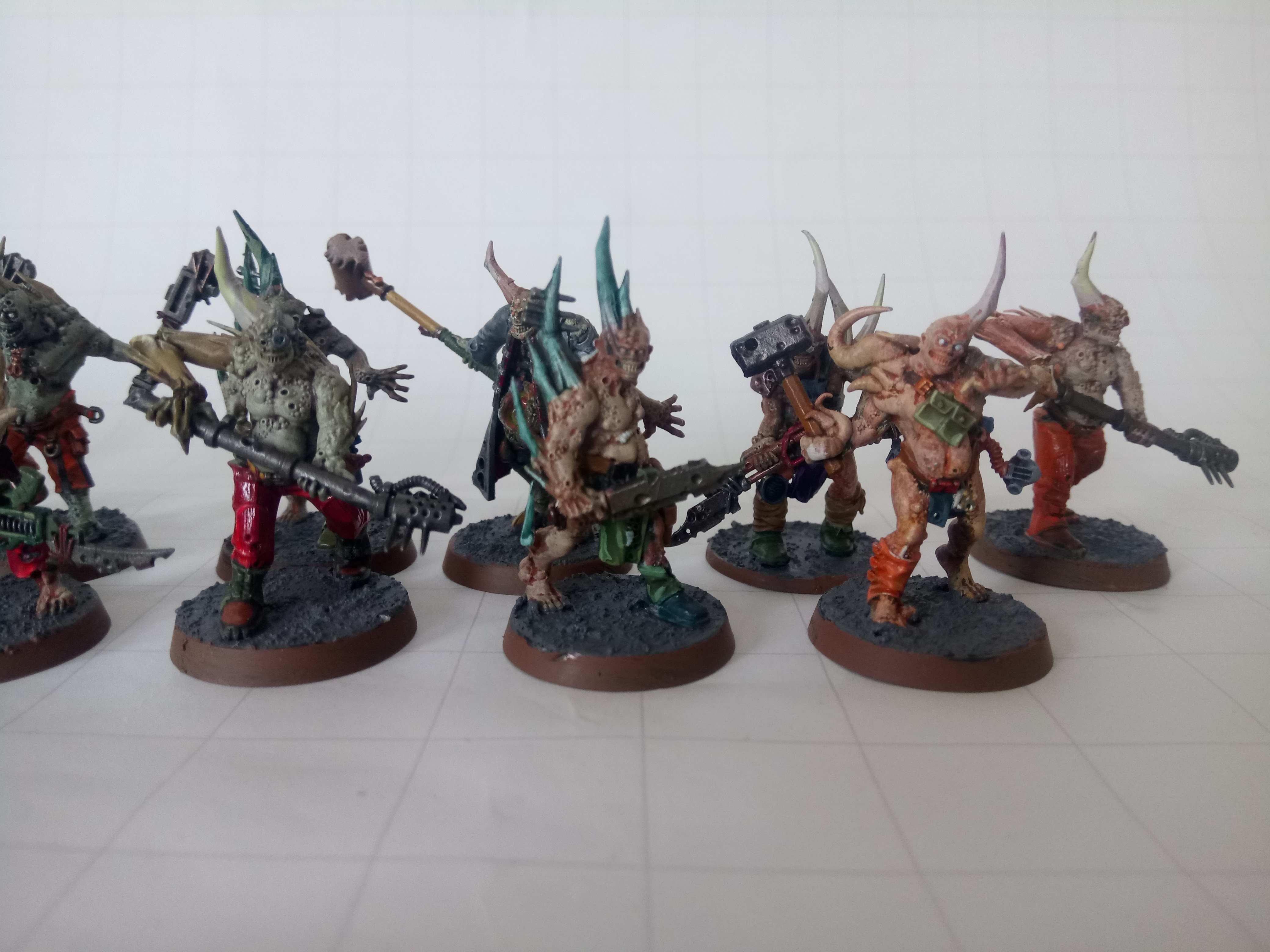