Every year on the Oldhammer forum we have a challenge.  Paint a model on a theme decided by the community; send it off so that all the models can be photographed together, and then one person drawn at random will win the lot!  It’s always great to see them altogether at the end, and all the different ways that people interpret the theme, and all the different models they use.  It’s not a painting competition either, so monkey-bastard handed noobs like me have a chance!

This year I chose to paint a Ganger.  I was fascinated by Confrontation back in the day, and had a tech gang that I was well pleased with.  Of course, I sold all my miniatures in about 2002 and haven’t managed to replace them yet.  Looking on ebay right now,  some of them are available for under a tenner each, so maybe now is the time…  as if I don’t already have a metric fuckload of miniatures waiting to be painted….

Necromunda passed me by the first time round.  I had discovered sex, drugs, and rock and/or roll by that point, and was so desperate to be cool that I probably wouldn’t have admitted to having ever even heard of Games Workshop, not at gunpoint, not on pain of death, not to save the life of my dear old white-haired granny.   The miniatures for Necromunda seem to be pretty divisive.  The plastic Goliaths aren’t really all that, but the Orlocks are much better, and it was an Orlock that I decided to paint.

Prism is a world currently under Imperial Interdiction, but many years ago it was a productive world, home to a handful of productive hive cities, and the fortress monastery of the Rainbow Warriors chapter of Space Marines.  The Rainbow Warriors took the best of the hive gangs and turned them into Adeptus Astartes, the rest were left to fight amongst themselves for territory and power.  Pictured below is one such ganger, of the Parti-Boys gang.  This gang were later involved in the l[REDACTED BY IMPERIAL DECREE-PLEASE REPORT TO YOUR LOCAL COMMISSAR FOR RETRAINING]t.

The Parti-Boys are one of Prism’s most feared gangs. 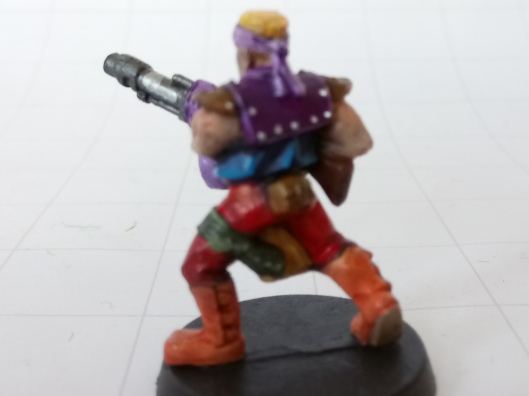 The Parti-Boys were responsible for the notorious Pog Balloon Incident of 369 M37.

The incident occurred when the Parti-Boys took revenge on the Purple Lord, by stealing his beloved pet Poggle, having it skinned, stuffed, and filled with helium, then replaced in the Lord’s apartment, all during the time it took the Lord to move his considerable bowels one morning. The Lord had the last laugh however, and over 700 members of the Parti-Boys were rounded up and kicked to death by the Lord himself, who burned out six bionic legs in the process.

One of the lesser-remembered Ork mobz from the Rogue Trader period was the Human Mercenary mob.  I am not sure I ever saw one painted or used.  When I pulled an old metal Escher ganger out of the lead-pile I knew what I needed to do.  With the release of Shadow War Armageddon getting everyone hot for Necromunda action, I thought that they could double as a Necromunda gang, should I ever decide to play it….

The galaxy is a big place.  Beyond the reaches of the Imperium are millions of Ork-held star systems.  Plenty of humans live in these systems.  Some are slaves toiling in Ork factories, others are (relatively) free, ignored as long as a massive tithe of weapons and vehicles are forthcoming (and the Orks have got better enemies to fight, of course).  Some of these humans are feral or semi-feral, living lives not much different the Orks themselves.  Some of them even seem to think that they are Orks, much to the amusement of Orks themselves, who reckon that these humans are cracked.  Nevertheless, when the Orks go off to Waaagh sometimes they bring some of these Kultured humans with them (normally as light entertainment or cannon-fodder); sometimes the humans come along anyway and just turn up, shouting in pidgin-Orkish and shooting at the same things.  Big Sal’s Dakkagurlz is one of those mobz….

So you buy piles of stuff on ebay but there’s things you’re not really interested in – LOTR miniatures, mid / late period fantasy troops etc.  Nobody wants to swap them for anything good, they’re not really worth anything, and you’ve got more than you can imagine ever needing for bitz.  My solution has been to band them together as Mutant Gangs.  Alpha Legion agents travel the galaxy, seeding corruption and rebellion on every planet they can.  As we know from Necromunda, mutants lurk in the underhive, angry and bloodthirsty, just waiting for the spark of revolution to be lit…. Or perhaps these are the scum that lurk in Chaos Barges, pouring forth in their millions during Chaos attacks, each bullet that ends their miserable life another bullet that can’t be used against Chaos Marines or daemons…

I’ve tried to include some narrative touches – for example the front row guy with the axe also has a Chaos Marine bolter, but there’s no clip in the bolter.  He’s just showing off something he found but can’t use.  Of course, if he’s lucky he’ll die before he gets found by a real Chaos Marine!  Likewise, of course, the presence of the hybrid.  Masquerading as a mutant during a chaos uprising might be a perfect place to hide until you can breed and pass on the ‘Stealer genes.