Another quick update, from big marines to littler marines.  The old RTB01s look piddly next to many of the new miniatures.  I have to say that while I am not wedded to any particular scale I think that some of the modern miniatures are too big.  I am not so much thinking of the warmachines, the super heavies and all that, but instead of the AoS giant figures, Nagash, for example, or the Verminlords.   Too much going on, too big compared to the other models… and that’s quite apart from the price.  Magnus and Mortarian are lovely miniatures, but £80+ is too much for me.  Of course, the quality of workmanship is completely different, there’s no denying that.  The RTB01s were the best they could do at the time and are really quite rubbish compared to the modern stuff but they were my childhood rubbish and that’s that!

This squad is a mixed batch of Oldhammer marines; you can tell these were hand sculpted, but that just makes them better! 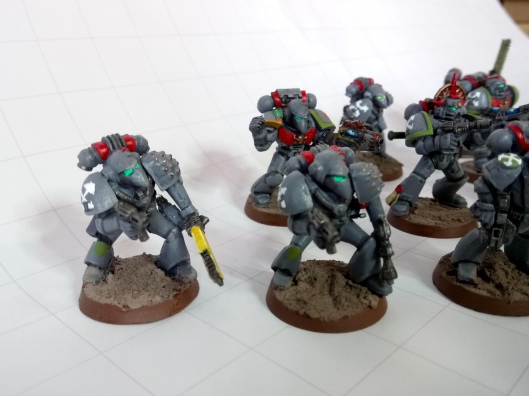