Right, finished basing this squad this evening.  I’m not sure how successful this has been.  I’ve included WHFB and LOTR figures in this Cultists Squad, and tried to draw the styles together through a uniform colour scheme and spot colours.  I think it’s OK, though the drummer with the plumed hat might be a step too far.  Still, I think that a group of cultists during a Chaos Uprising could be mixed up, from all backgrounds and social classes and areas of the planet and with differing dress styles.  Things I like about this.  I love the two old models particularly.  The old plastic guards are favourites of mine, and the female guard model is great.  I like her mullet!  I liked painting a crude Alpha Legion hydra on the drum.  I like to think that these cultists are utterly deluded.  They think they’re part of the gang, but they’re nothing but fodder, useful idiots.  I like the harem pants wearing LOTR guy who looks like Lenin – I gave him a plastic Necromunda arm which I think workds.   I’m getting better at green fatigues and caucasian skin painting.    Still no good at eyes or hair! 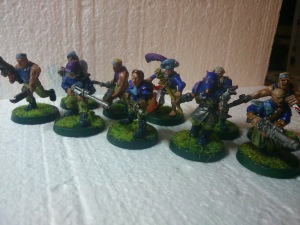 Been a quiet couple of weeks on the posting front.  It’s not that I’ve not been doing anything, it’s just that I haven’t gotten anything finished, so nothing to show off really.  But I’ve just finished basing this Terminator Assault Squad for my Steel Guard Space Marine army.  I’ve used a variety of models, an old lead Grey Knight body for Segeant Rakosi (though I’ve used modern plastic arms so that I can give him a thunder hammer and storm shield), an old lead lightning claws termie, a couple of plastic terminators from mid-late period wh40k, and finally a Dark Vengeance termie that I have given a truly huge thunder hammer for uber-smiting.  I’m generally quite pleased with these.  I’ve tried a few new-to-me techniques here and whilst none of the actually worked, i can see better how to do it next time.  Here’s Squad Rakosi in all their (slightly shabby) glory!