I know a lot of the Oldhammer fans don’t approve of the whole Insignium Astartes thing, seeing it as a way of dictating how you paint and play.  For me though I enjoy trying to get the squad markings right!  It has an added bonus that you don’t need any further markings to work out which miniatures are a squad, so that if they get mixed up there’s no guessing what toys go together! When I first started painting I used coloured splotches on the bottom of the bases to indicate which marines went where, but as I became more confident and started painting squad markings I found that there was no longer any need.  Of course, I couldn’t tell you why it’s important not to confuse Marine With Bolter A with Marine With Bolter B, but there you go.

This latest squad means that I now have painted (and named) 9 out of 2nd Company’s 10 squads.  One more tactical squad and we’ve got a full company.  Expect that sometime this year :p 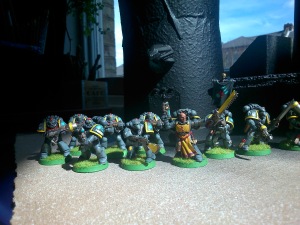