Final completed work for now, this little lot is another attempt to play with Constrast paints, again with mixed results. Commissar Raine is firmly newhammer, released within the last year or so. I thought it was a great sculpt, full of life and hyper-realistic despite being perfectly in-universe. When I opened the box I was surprised and disappointed. If I hadn’t received this item directly from GW Mail Order I would have thought it was a recast. The detailing is lost, the resin feels flimsy, the pieces didn’t fit together very well. I have only positive experience of GW’s resin before this, and if the internet hadn’t been full of people making similar complaints I would have complained myself. I’ve made the best of it though, and generally I am happy with Severina. Sanctioned Psyker Sturm I am not so happy with. I just could not get his eyes right – I have so many problems with painting eyes, I really am not that good at the finework. I tried to paint one eye glowing with a green flame to indicate psychic doings, whether this makes it even more of a mess I don’t think I am qualified to say. Still, practice makes perfect they say, maybe next time I’ll be a bit better.

The non-GW minis in the squad are two troopers from a Bad Squiddo kickstarter. Nice minis, one of them has a really badly sculpted hand though. Hands are hard and plenty of early GW minis have similar problems. There is also Oleg, who has fallen through a fart in space-time from the Advance on Berlin and landed in a massed battle somewhere in the 41st Millenium. He is fairly clear on his orders though, do whatever the nearest commissar tells you to do, and so he has slid nicely from our dystopian past into our dystopian far future. His hands were well sculpted but his face is a mess that I lacked the skill to do anything with. Let’s pretend he earned the right to carry the banner by single-handedly knocking out a Nazi flamethrower team despite receiving serious burns. That’ll do!

A relic of years passed when Land Speeders were a support choice for the Imperial Guard.  this is a lovely miniature that was a pleasure to paint.  I’m pleased with the way this turned out, I think the crewmen especially came out alright.  I was least pleased with the tiny repair job I did, replacing a missing under-slung bolter with a plastic bolter from a modern Space Marine tank.  I decided not to put any iconography on the Land Speeder so that it could be used as either a loyalist or traitor army, depending on my mood. 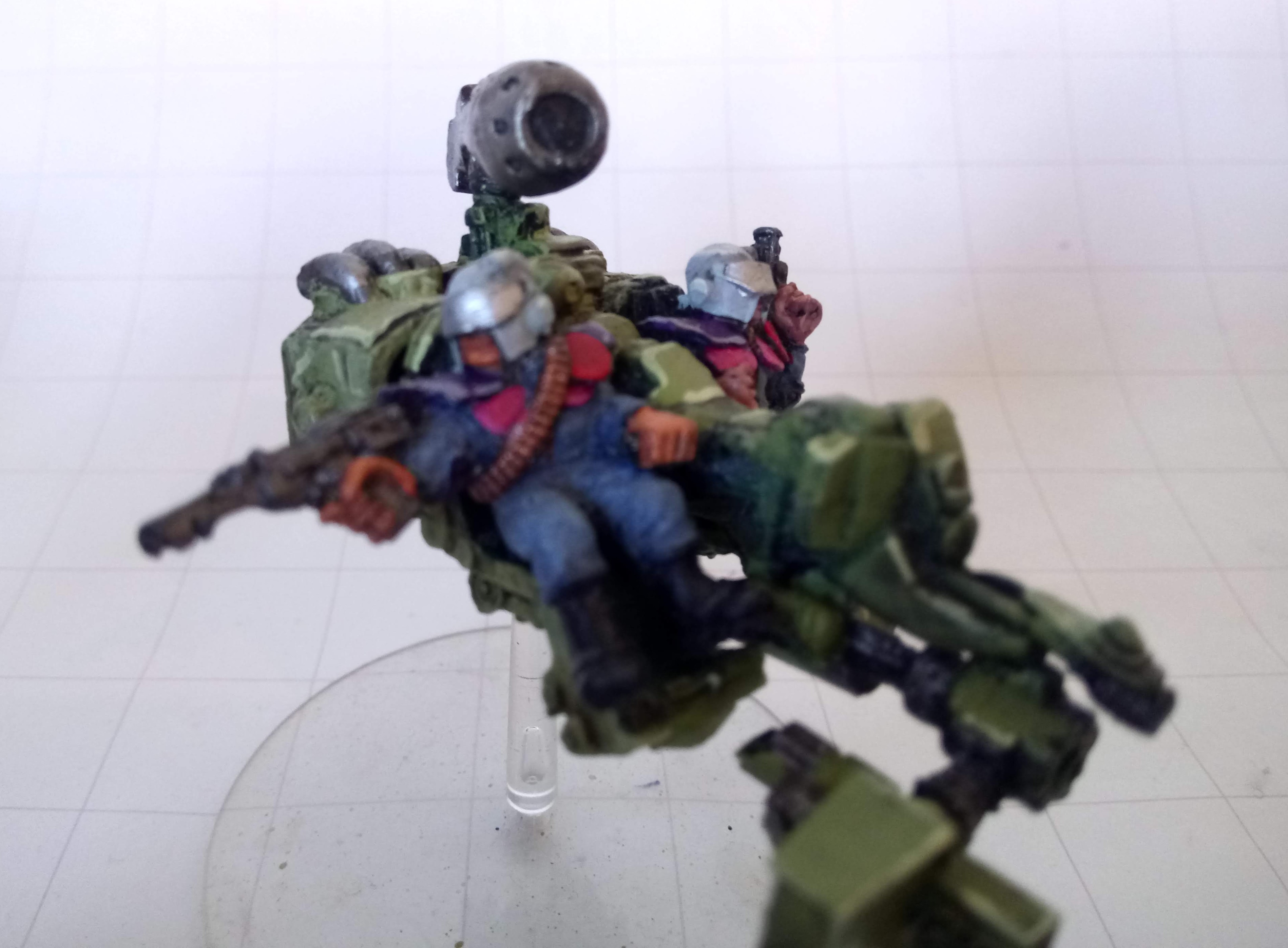 “Hold this thing steady whilst I take a shot…”

So it’s been a bit quiet from me in December.  December is a busy month for us all, but I got some painting done.  I finished two things since I last posted, and to tell the truth I’m not really happy with either of them.  In neither case do I think I’ve improved on my earlier work.  Still, that’s not the end of the world and after a week or two of them sitting on my shelf I’ve decided to add them to the blog anyway.

First up is another Steel Guard tactical squad.  This is 4th Company I Tactical Squad.  Led by Veteran Sergeant Sakhalin, a lovely Rogue Trader era mini, mostly this squad are old plastics. 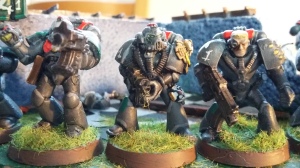 Sakhalin. Would you believe I didn’t notice those stray strands of grass when taking the photos!

After reading a comments conversation on someone else’s blog, I painted the edges of the bases brown this time and I have to admit that I think this is the best way of basing I’ve seen so far.

The scale problems of mixing parts are shown here. I’m not especially bothered as I don’t think it’s a deal breaker but I know some people disagree.

I hated the 2nd Edition Box Set Space Marines when I was a kid. Compared to the RT metal minis and the wonderful mix-n-match RTB01 they seemed lifeless and dull. But as unit fillers they are a pleasure to paint.

Next up is a unit of Imperial Guard.  I’m more used to painting traitors and cultists, and found this lot hard work.  The unit consists of a standard bearer and his bodyguards, and 2 heavy weapons squads.  Mostly these are Rogue Trader models.  I am a huge fan of the RT plastic Guardsmen – though when I was a kid I thought the very boring.  The injured guard is a great sculpt, a real pleasure to paint.  The guard with the plasma gun had damage to his face which I have tried to paint as a scar, with only limited success.  I hate painting eyes – the good eyes in this unit, on the missile launcher guard, were done by the original owners. 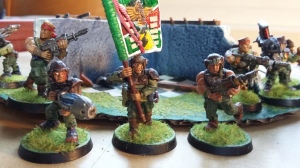 When you’ve got a task and only the best will do!  If no-one else can get their man and kill the baddies!  etc etc.

The last few weeks I have been painting up the Last Chancers.  Col. Shaffer’s Last Chancers were a late 90s WH40k gang that allowed you to recreate movies like The Dirty Dozen, or play Action Force “GI Joe” with your armies.  The idea was that this squad were hand picked by a tough old Colonel from a bunch of prisoners, picked because of their unique skills, and were offered the chance to embark on a suicide mission (or be executed).   Each character isn’t really a character but an action movie cliche.  Especially the two women, “Warrior Woman” and “Rocket Girl”.  I guess being female is a character trait in Nottingham.

I really enjoyed painting this lot.  I put a lot into it, and whilst my critical eye sees now lots of things I could have done better, I’m still very pleased with them. 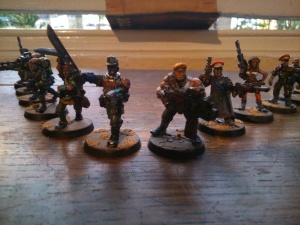 Good evening and welcome to my Painting & Modelling blog.  Rather than faff around with a proper introduction I think I’ll just dive straight in by picturing what I’ve got on my painting table right now.

This bunch are part of my ongoing 40k Alpha Legion & Cultist army.  This is a Chaos Cultist Squad.  The Dark Vengeance chap in the middle is their squad leader.  For Oldhammer fans, there’s an early metal guards(wo)man in the front row, and a plastic Imperial Guardsman too.  The rest of the cultists are various ‘human’ figures from across different ranges.  I like to use colours to tie in the cultists, assuming that they’ll be people from all parts of society getting tooled up and going off to fight for their dark masters.  This lot are about 50% complete and you’ll see them again when they’re done!

Cultists from across the ages!