Nargob is a Weirdboy who really enjoys being weird.  Where most weirdboyz are looking for an excuse to go and sit somewhere quietly out of the way, Nargob is looking for a war to fight.  He gets a thrill out of seeing how much power he can channel.  He particularly enjoys overloading over psykers and causing their heads to explode.  Long ago he left his minders behind and disappeared off in search of bigger and better battles, and along the way he has picked up a load of madboyz who sing and chant for him, doing tricks and pratfalls.  They travel from waaagh to waaagh, performing for da boyz and searching for psykers that Nargob can pit himself against.  He’s not found his match yet! 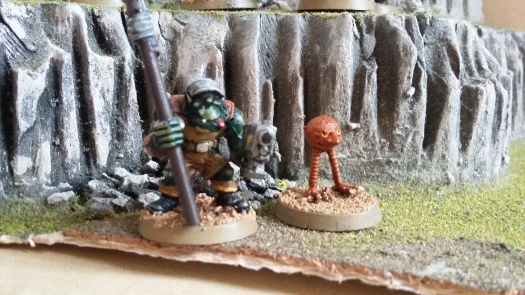